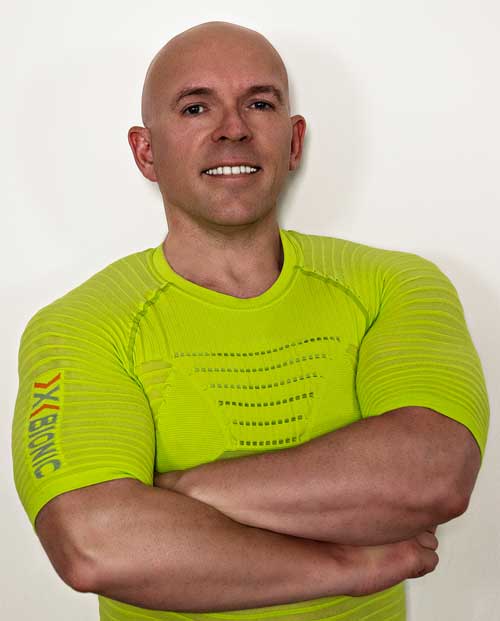 Erik has been involved in the fitness industry for over twenty years and is one of only a hand full Dorian Yates HIT Master Trainers worldwide. Before moving to the UK in 2006 Erik worked as a Personal Trainer in the Netherlands, Belgium and Germany, training clients at all levels; from the person next door up to Olympic champions. Erik is especially proud of the number of top athletes he has trained over the past 20 years, in disciplines such as golf, tennis, football, athletics, cycling, bodybuilding and many more. Many of his clients won European, World or Olympic championships with his help. Amongst his clients are EastEnders star Samantha Womack and actor Jon Campling (Harry Potter, Final Fantasy and BBC Doctors). Erik is a leading expert in High Intensity Training (HIT), a scientifically based strength-training program originally developed by researcher Arthur Jones and pioneered by 6-times Mr Olympia Dorian Yates and world champion bodybuilder Mike Mentzer. Erik has been trained by some of the best athletes in the world, such as 6-times Mr Olympia Dorian Yates, Mr Olympia Samir Bannout and former Boxing world champion Ricky Hatton. Erik is one of the few Personal Trainers in Europe, and the only one in the UK, who has been trained by one of the world’s best, Los Angeles-based, Celebrity Personal Trainers, Jorgen de Mey. Amongst Jorgen’s clients are celebrities such as Angelina Jolie, Ben Affleck, Jake Gyllenhaal, Penelope Cruz, Clive Owen, Keira Knightly, Jerry Bruckheimer, Tom Brady and many more! Erik regularly travels to Los Angeles to work with Jorgen and update his knowledge based on the latest developments in Personal Training. Erik is currently Preparing for 2017 UKBFF/IFBB competition, coached by Mr Olympia Samir Bannout. For further information, contact Erik on 07538 438282 or send an e-mail to erik@erikmeijer.com http://www.erikmeijer.com